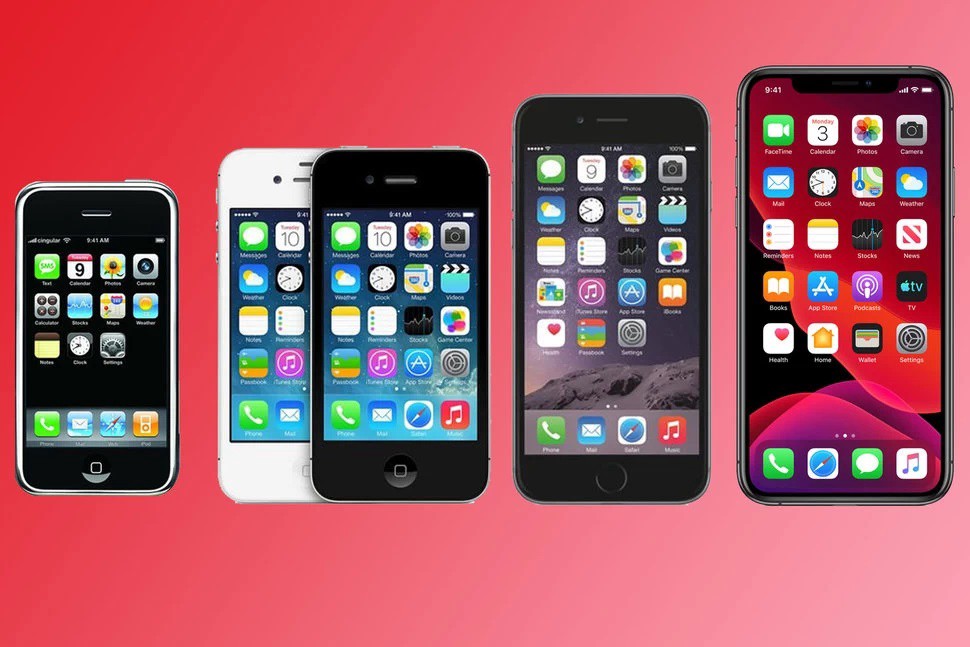 Most people worldwide prefer androids because they provide a wide range of software and hardware customizations.

On the other hand, iPhones have a sleek appearance and a lightning-fast browsing performance. The iPhone’s fast surfing speed is one of the reasons why iPhones are superior to Android smartphones.

The iPhone has no pre-installed software, but Androids have a lot of bloatware that eats up a lot of storage space from manufacturers. The iPhone’s software, iOS, elevates the user experience above that of Android.

Compared to Android, the smartphone stack on iOS is more efficient in several aspects. This is one of the factors contributing to the increased cost of Apple’s iPhones.

Since the focus of this post isn’t on iOS vs. Android, we’ll move on to a chronological list of smartphones that will be available between 2007 and 2021.

That means that the correct place is to view all of the Apple iPhones in chronological sequence along with their images, release dates, and specs.

People worldwide like Apple iPhones, and the company has dominated the industry for years. Apple emphasizes the iPhone’s simplicity, which is one of the primary reasons for building the iPhone so that consumers cannot change the batteries. On the other hand, the batteries may be altered with care by a skilled/expert individual.

On January 9th, 2007, the first iPhone was launched and available to the public. However, sales did not begin until late in June in 2007, over an entire month after the first announcement on January 9th, 2007. The 4GB model costs $499, while the 8GB model costs $599. It is the first iPhone on the list of iPhones in chronological order of release. There aren’t many of these phones left. We can tell from the reviews that this device was strong, sleek, and a big hit for Apple.

Apple launched iPhone 3G on the 9th of June in 2008. This is a 3G model launched by Apple after the success of the first iPhone. This model of iPhone was the first in smartphones to bring GPS to a phone and make apps like Google Maps a little more appropriate. Also, in the very same year, Apple replaced Mac with MobileMe and launched the iOS App.

On June 9th, 2008, the iPhone 3G was officially launched. Apple launched this 3G model following the popularity of the original iPhone. Also, in the same year, Apple changed the Mac and launched the iOS App. This version of the iPhone was the first smartphone to provide GPS to a phone and make applications like Google Maps a bit more suitable.

In 2009, the iPhone 3GS was launched on June 19th. This model was the second-generation iPhone, and it was Apple’s third iPhone. Adding an oleophobic layer to this iPhone was made to help it resist fingerprints and oil.

However, the screen was the same size as the two previously announced iPhones. Furthermore, this model was the first to incorporate voice control, a forerunner to Siri.

In 2010, the iPhone 4 was launched on June 24th. This was Apple’s first iPhone with significant upgrades to the display. The iPhone 4 included:

The iPhone 4S was the first available on October 14, 2011. Apple introduced various new features to this iPhone model, including Siri that arrived with a virtual digital assistant function, a Pixar-like persona, and mirroring that enabled users to reflect their interface to the Apple TV instantly. This iPhone was also the first to capture movies in 1080p using the back camera.

Apple launched the iPhone 5 on September 21st, 2012. The aspect ratio shifted from 3:2 to 16:9 in this model, making it more cinematic in appearance. A 5-element lens and a third microphone were installed on this iPhone to improve clarity. It was the first iPhone to enable 4G LTE, which altered the whole mobile broadband in the period.

iPhone 5c was announced on the 20th of September in 2013. It was sold at a lesser price than the previously announced models of iPhones. This model was multicolored and moved to a variety of colorful polycarbonate casings. This model has a better front-facing camera for FaceTime and more wireless LTE bands.

On September 20, 2013, the iPhone 5s was also unveiled. It’s an Apple premium model with a 64-bit operating system. A fingerprint sensor replaced the home button for the first time in an iPhone model. iPhone 5s comes with the capability of OpenGL ES 3.0 for visuals that enable the user to enjoy a highly detailed skin texture when gaming.

On September 19th, 2014, Apple released the iPhone 6. Apple moved on to a whole iPad-style design with the debut of this model. iPhone 6 featured a speedier CPU, NFC for the Apple Payment section, and improved cameras. In comparison to previously published models, it also boasts a bigger screen.

On September 19th, 2014, Apple released the iPhone 6 Plus. It features an almost identical design to the iPhone 6, except for a bit of difference in size. On the other cameras, this model’s cameras benefited from significant improvements in sensor technology, noise reduction, tone mapping, and even a little Focus Pixel technology.

The iPhone 6s was released on September 25, 2015. Changes were made to every part of this model. The camera to the processor all changed. The iPhone was made with entirely different materials, and some new core technologies were also added to this model.

People were able to buy the iPhone 6s Plus for the first time on October 15, 2015. There are numerous outstanding new features in this new model: a comparable design to the iPhone 6S; Optical Image Stabilization, a feature that has not been available on any prior iPhone models.

See also  Why Is My Xbox Not Working 8 Common Problems

On March 31st, 2016, Apple released the iPhone SE. This iPhone model has a 4-inch display. It had a 64-bit Apple A9 CPU and an M9 motion compressor built-in. Additionally, Apple claims it is the “most powerful 4-inch smartphone ever created.”

In 2016, the iPhone 7 was released on September 16th. It comes with various internal adjustments and some minor design tweaks. In this model, a “solid-state” pressure-sensitive controller has replaced the physical Home button. It was claimed that this model was dust and water-resistant.

The iPhone 7 Plus was released on September 16, 2016. The design of this model was quite similar to that of earlier models. This iPhone 7 Plus, on the other hand, was at least 40% quicker than the iPhone 6s CPU. It was the first smartphone to be equipped with a dual-lens camera.

In 2017, the iPhone 8 was released on September 29th. There were new glass bodies, but the Touch ID Home button was still present on both the top and bottom of the display.

In 2017, the iPhone 8 Plus was released on September 29th. It closely resembles design as the earlier version of iPhones had. It did, however, have superior cameras and sensors than previous models of the iPhone.

On November 3rd, 2017, Apple unveiled the iPhone X. This model of iPhone offered a massive shift in design in the complete series of iPhones. The front-facing camera and sensors of the iPhone X are integrated into the screen itself, removing the need for any display bezels.

On September 12th, 2018, Apple unveiled the iPhone XR. It’s designed for those who can’t afford an expensive device but don’t need all of the iPhone’s newest features. With its “Liquid Retina” display, it sports an advanced LCD.

The 21st of September saw the release of the iPhone XS. It includes OLED panels and the maximum pixel density with Dolby Vision, Wide Color, and HDR 10. Some additional upgrades include wireless charging, a TrueDepth Camera System, as well as an edge-to-edge display.

On September 21st, 2018, Apple unveiled the iPhone XS Max. Apple originally introduced a phone with a huge display, on this model, with a 6.5-inch screen. iPhone XS Max also arrived with a 7-nanometer A12 Bionic processor and includes enhancements including Dual-SIM choices, Bluetooth 5.0, and nano-SIM e-SIM for utilizing two mobile numbers simultaneously.

The iPhone 11 was released on September 10th, 2019. It was outfitted with Haptic Touch. Apple also boasted about the enhanced water-resistance of this model, claiming it included the most robust smartphone glass ever utilized.

In 2019, the iPhone 11 Pro came out on September 10th. This model was furnished with an ultra-wide-angle camera that enabled the customers to shoot excellent quality photographs even in the regions beyond the frame. The Haptic Touch technology was highlighted in this model, which came in matte textured finishes.

On September 10th, 2019, the iPhone 11 Pro Max was unveiled. There is a three-lens camera system with optical image stabilization for the telephoto and wide lenses when you look at the back. It has been approved to withstand a maximum depth of about 4 meters. Customers loved this phone, and it performed well overall.

The iPhone 12 mini was unveiled on October 13th, 2020. Because this iPhone model was smaller in size, it sparked a trend away from bigger phones and provided an option for those with tiny hands. The iPhone 12 mini is great to carry due to its small and lightweight design. This phone took terrific pictures because of its wide-angle and ultra-wide-angle image processing software.

On October 13th, 2020, Apple unveiled the iPhone 12. The iPhone 12 has a Super Retina XDR OLED display with an edge-to-edge design and is the successor to the iPhone 11. It offers many solid features and comes at a meager price.

Apple’s iPhone X was the first to be compatible with 5G mobile broadband technology. On October 13th, 2020, Apple unveiled the iPhone 12 Pro. This feature of the iPhone 12 Pro allowed it for quicker uploads and downloads, faster and better video streaming, higher quality facetime, and enhanced gaming.

The iPhone 12 Pro Max was released on October 13th, 2020. Incorporating capabilities for 10-bit color depth images, this model’s video quality improves. All four other models in the range pale in comparison to this one.

On September 14th, 2021, the iPhone 13 mini was released. It is perhaps the last tiny phone. The A15 Bionic system-on-chip makes it incredibly powerful. HDR10 is supported on the device’s 5.4-inch super retina XDR OLED display. And it can endure water pressures of up to 18 feet.

iPhone 12 and iPhone 12 are mini-inspired. The iPhone 13 was unveiled on September 14th, 2021. It’s similar in appearance to the new model. It features sensor-based stabilization since the wide-camera hosts a bigger sensor. As a long-term investment, it’s one of the most dependable phones around.

On September 14, 2021, Apple released the iPhone 13 Pro. This phone is the successor to the iPhone 12 Pro and is one of the most rugged phones currently available. It’s also ideal for those who like slimmer phones.

On September 14th, 2021, Apple unveiled the 13-inch iPhone 13 Pro Max. It is by far the finest among iPhones and gives everything that each user needs in their phone. This phone has a 6.7-inch display with a refresh rate that ranges from 10Hz to 120Hz, ensuring a fluid user experience. iPhone 13 Pro Max boasts a 120 Hz refresh rate display rate and excellent battery life, and it packs the quickest performance of devices.

So that was the list of iPhones that Apple has released so far in order of release date. This site will be updated when new iPhones from Apple are released. Please let us know if you discover any inaccuracies in the data. I hope with this article you can see the legacy of Apple iPhones. This list of iPhones in order explains a lot about Apple’s Evolution throughout time. Share this article with your coworkers if you’re an Apple iPhone fan.

Notion – Your All In One Notes Application

What is the best laptop for music production...

The Key to Success in a Competitive IT...

Seven Amazing Tips to Use Your LMS Effectively

4 Things Technology Will Be Changing in The...

Rust Removers – What To Know